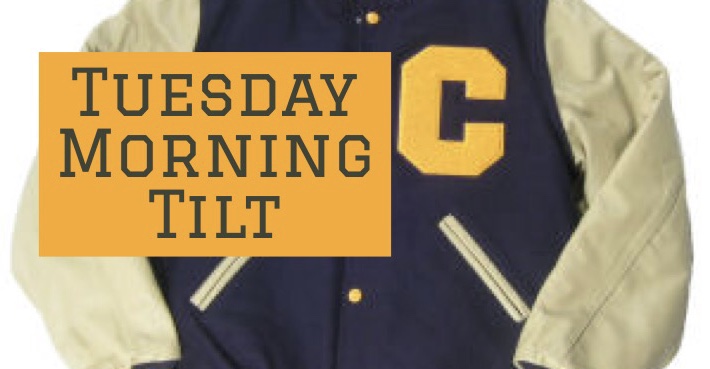 What’s up guys? I’m back with a second edition of Tuesday Morning Tilt. I’d like to thank all 14 of you that read last week’s debut column! Entering with big goals this week, as we shoot for at least 20 readers! Probably won’t get there…but we’re all about positive thinking here at The Combine.

For those of you that are checking out TMT for the first time, I take Peter King’s beloved Monday Morning QB format and turn it into something that is completely unprofessional and nowhere near as good. Let’s go.

Fantasy Football Gave Me A Chubb-y This Week

I told you guys how I got lucky and won in my fantasy league last week due to a late Gronk scratch. Well…that win streak came to an end real quick. I was playing the youngest guy in our fantasy league this week and of course he’s always got a stacked team, because he’s the only guy in the league without kids and actually has free time to research this shit. I never beat this dude, but I’ve got Nick Chubb on my team and was holding my own when Chubb broke a 92-yard TD run. I WAS LOSING MY FUCKING MIND at this point! As any self-respecting fantasy football veteran would do, I immediately started talking shit via our league group text. Then, of course…Alvin Kamara, Devante Adams, and Zach Ertz absolutely destroy my ass and I lose, which drops my record to a warm and cozy 3-7. By the way, when did Cleveland start celebrating every Browns victory like it’s the fucking Super Bowl? I’ll give them a pass on the win that broke the long losing streak, but we’re past that point now. Your supposed to win some games Cleveland, you don’t get a damn parade for beating the Falcons at home.

Emotional Hedge Bets and Shopping With The Girls

For those of you that don’t know, I’m a long-suffering Tennessee Volunteer football fan. There hasn’t been much to cheer about the last few years, so I’ve developed the habit of making “emotional hedge bets” when my Vols are playing. It’s a pretty simple concept…I put a small amount on the team that Tennessee is playing, if the Vols lose, I get a little monetary reward to soften the blow of the loss and if Tennessee wins I’m happy to pay. It’s a system that works well for me in my warped, football-fan mind. Those of you that follow college football probably know that it’s been another down year for my Vols, which has led to a pretty decent little nest egg this season. Well…this past Saturday, Tennessee was hosting the Kentucky Wildcats, one of our hated rivals that also happened to be ranked #17 nationally. Kentucky was a 4.5 point favorite over Tennessee…a lock if I’ve ever seen one. So, I decide to put my entire season’s worth of emotional hedge winnings on the Wildcats. It was a 3:30 kickoff and I put my bet in fairly early in the day. After I get the bet down, my wife tells me that our daughter desperately needs “winter clothes” and that we’re going shopping. Those of you that are fathers know that clothes shopping with your wife and daughter is it’s own special kind of torture, but as an added bonus this little excursion would be taking place during the game that I had tons of money on. Of course…the Vols play inspired football and win straight up, costing me my entire “emotional hedge” bankroll. This crushing loss/uplifting victory is going on while my wife and daughter are feverishly spending my hard-earned money on ridiculous items my daughter apparently “needs”, like shoes and a jacket. Don’t they know I could put that money in action for the Vols’ last two games of the season? I could practically guarantee that we win out by losing the right amount of money!

Keeping Up With The Kowboys

I’m not sure exactly why, but I’m utterly fascinated by the Dallas Cowboys. I think it’s kind of similar to those horrible reality shows that my wife watches on E! and Bravo. The Cowboys are my Kardashians. I would legitimately pay a large sum of money to watch an uncensored, no-holds-barred reality series that focused on Jerry Jones and the behind-the-scenes operations of the Cowboys year round, like Hard Knocks but dialed up to 20. I’m convinced that Jason Garrett has video of Jerry Jones killing puppies or something. Every time this entitled prick seems on the verge of losing his job, he somehow miraculously pulls out a win, like he did against Philly Sunday night. I sympathize with Jerry Jones, because I think I would probably act the same way Jones does. If I were an old, out of touch billionaire, I’d totally build awesome stadiums with bars and dancers everywhere and give huge, salary-cap crippling contracts to players that were “my guys”. I also really appreciate that he was the one owner that called Roger Goodell out for being a total fucking failure at his job when the commissioner’s contract came up for renewal. Jerry’s heart is in the right place and he’s willing to do anything to help his team win, but he’s always waaaay off base with his attempts to help the franchise. The Patriots got Josh Gordon in a trade for peanuts, the Eagles gave a third-round pick for Golden Tate. Jerry knows that the Cowboys need a wide receiver, so he gives up a first-round draft pick for…Amari Cooper?!? I bet Jerry’s the type of grandpa that would buy his grandson a gold Rolex watch for his eighth birthday. It’s a nice gesture and shows you he really cares…but what the fuck does an eight-year old do with a Rolex?

I didn’t get to try any fancy beer or take any trips this weekend. I did get the chance to go over to a buddy’s house Sunday afternoon to watch football. Several of my friends are into the bbq thing. They have fancy smokers and Green Eggs. They perfect recipes and processes for smoking ribs and other things. I am totally cool with this, as I do none of the work and don’t invest any time or money, but still get to eat some awesome food from time to time. This Sunday my buddy smoked ribs, but he also smoked something called a bologna roll. I’m not sure how popular this stuff is outside of the South, but basically it’s a huge slab of bologna that’s about the size of a football. My friend injected this thing with jalapenos and smoked it for hours with hickory wood. It was amazing! It was also something that my cardiologist could build a vacation home on. I’m pretty sure I’ve got a heart attack coming any day now. If I somehow survive, I’ll see you here next Tuesday morning.