Ronnie is out this week with the flu, but Presidente has been drinking plenty this week and happy to cover for him.

Ronnie is out this week with the flu, but Presidente has been drinking plenty this week and happy to cover for him.

The weather here in Atlanta finally decided to dip into temps that make the birds and your balls disappear for winter.  There are only a few weeks left until Christmas and it is time to make it feel a lot more like Christmas! … as in getting together with friends and family and get hammered on some good shit. 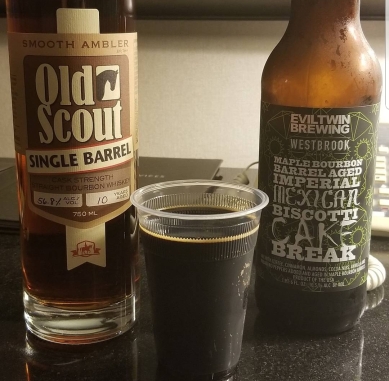 First off, I got to knock out two birds with one stone while traveling for work this week.  While winding down after a conference, a co-worker and I decided to bust out something special from our cabinets at home.  I brought along a delicious Evil Twin Brewing & Westbrook Brewing collaboration called “Maple Bourbon Barrel Aged Imperial Mexican Biscotti Cake Break”.  This delicious American Imperial Stout is chock full of flavor with coffee, cinnamon, almonds, cocoa nibs, vanilla, and habanero peppers added and then aged in maple bourbon barrels.  This 10.5% ABV puppy was aging in my cabinets and was just awaiting a special occasion.  BeerAdvocate has it as a 4.4/5, but no one uses a 5 scale anymore because we’re adults and fractions are hard.

As Ronnie mentioned last week, we aren’t giving enough love to the brown liquors… and #AllLiquorsMatter.  My co-worker brought a nice bottle of Smooth Ambler Old Scout Single Barrel.  This delicious 10 Year Old (can you say that?) was smooth and the perfect nightcap to end a long couple of days out of town.  It was well balanced and consistently receives high scores from enthusiasts. 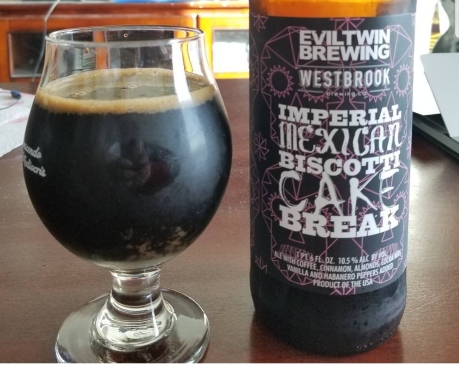 After getting home and having a night to relax with no real sports to be watched, I busted open another Evil Twin Brewing & Westbrook Brewing collaboration and the base of the previous beer mentioned called “Imperial Mexican Biscotti Cake Break”.  Similar to that one, this had been sitting in my cabinet aging for about a year and it was even more delicious as the first one I had.  This ale has coffee, cinnamon, almonds, cocoa nibs, vanilla, and habanero peppers added and also comes in at 10.5%.  This is one of the smoothest 10.5% beers I’ve ever had.  You get the different notes of the coffee, cinnamon, cocoa, and vanilla… and then a nice little heat from the Habanero at the end to let you know that you are alive.  This is probably my favorite beer when it gets cold out… and luckily I have one more stashed away.

The final entry I’ll share this week is this aggressive bourbon from Elijah Craig.  It’s their Elijah Craig Small Batch, Barrel Proof Straight Bourbon Whiskey.  This motherfucker comes in at 133.2 proof and will definitely put some hair on your balls… but it is really smooth for that strength.  You have to keep in mind, this isn’t for everyone… you have to have an appreciation for bourbon.  So don’t share this with just anyone.  I have this bottle for my home collection and bust it out every once in awhile.  At roughly $60-70/bottle, this is a solid purchase to keep around.  There are better options out there, but usually at twice the price.

That’s it for this week, folks.  Ronnie will be back next week as we continue to prep you for Christmas and New Year’s Eve drinking.